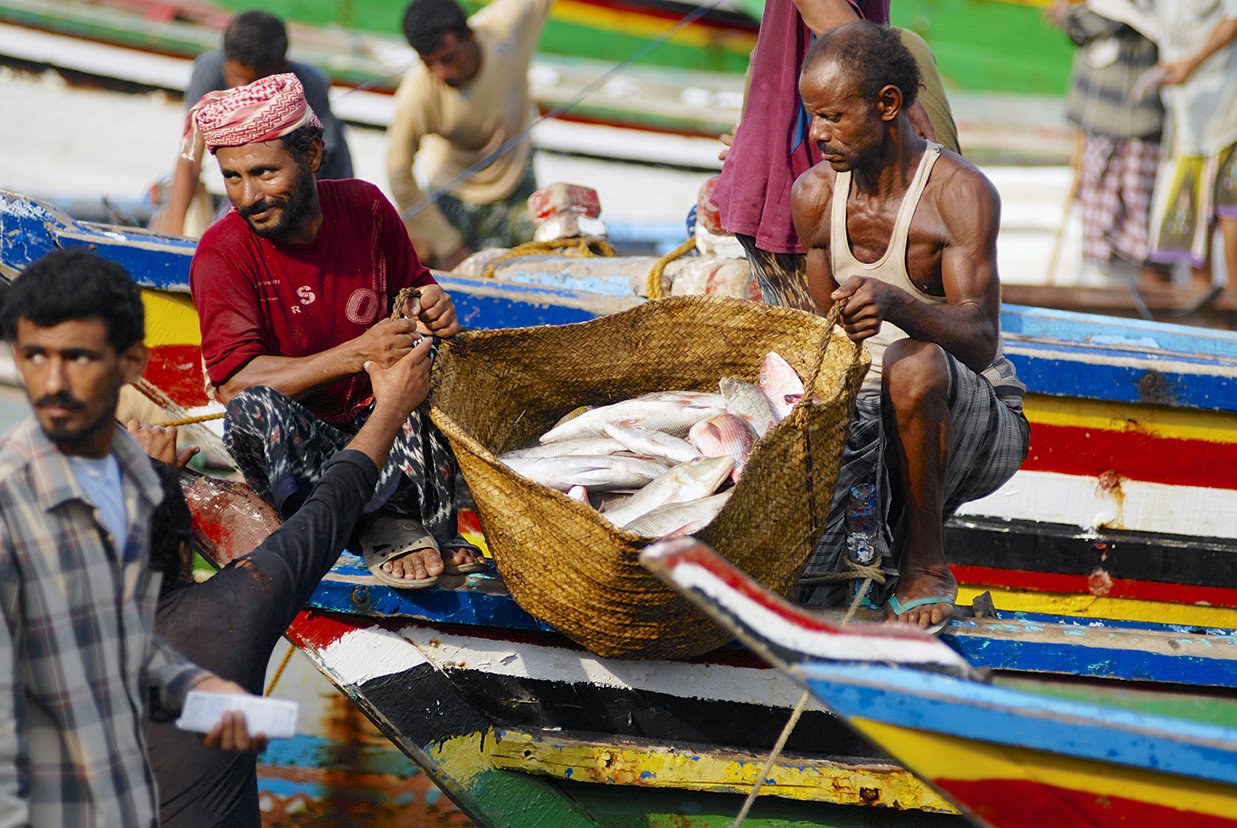 Fishermen in the province of Hodeidah
November 5, 2018 4 minutes, 35 seconds Download the full paper

Corruption, or the abuse of power for private gain, is deeply entrenched in the Yemeni political economy. For decades Yemen has witnessed state capture, with political leaders at the highest level extracting rents from state institutions to benefit a select few. Administrative corruption, too, has been commonplace in Yemen: low-level bribery and favoritism have become a part of everyday life. There is arguably a cultural acceptance — even an expectation — of corruption in politics and business, as informal networks have come to wield more influence than official institutions.

State capture and administrative corruption in Yemen have their origins in the presidency of President Ali Abdullah Saleh. Under Saleh, a band of elites built a system of patronage over the course of the 1980s and 1990s, both before and after the 1990 unification of North and South Yemen.[1] The main beneficiaries of this “neopatrimonial” patronage system were the members of Saleh’s family, tribe, and close associates, who were installed into the upper echelons of Yemen’s military structures and security apparatus. The rules of the game were simple: state-sponsored handouts in exchange for loyalty to the regime. After oil was discovered in Yemen in the mid-1980s, oil and gas rents bankrolled the expansion and maintenance of Saleh’s patronage network.

Following pressure from the international community to address endemic corruption in Yemen, a wave of anti-corruption reforms were introduced in the mid-2000s. Despite praise at the time for what appeared to be progress towards addressing corruption, in the long term the reforms seem to have proven ineffective. In the meantime, Yemeni oil production declined after 2001, and Saleh’s patronage system became increasingly untenable.

Widespread protests broke out across Yemen in early 2011 and an elite power struggle ensued in Sana’a. Protestors were united by a shared animosity against the corrupt system they closely associated with Saleh and his cohorts. Saleh stepped down in February 2012. Saleh’s successor, President Abdo Rabbu Mansour Hadi, and the transitional government that he presided over talked tough on corruption. However, extensive corruption continued under the new government: patronage payments accelerated, fuel subsidies increased for the private sector, and money intended for  humanitarian and development aid donated by the international community was diverted. In this context the Houthis rallied popular support by tapping into anti-corruption sentiments. After the Houthis entered Sana’a in September 2014 with the presumed support of former president Saleh, they signalled their determination to fight corruption and present themselves as a worthy alternative to the status quo. Operating under the cover of an anti-corruption banner the Houthis attempted to push Hadi from power in early 2015. This move led the Saudi-led coalition to enter the conflict in support of the Hadi government in March 2015, intensifying the conflict.

Over the course of the conflict, Yemen has witnessed corruption that continues to operate according to the same rules as before the war and at an equally troubling rate. As the conflict has fragmented and regionalized the country, however, state capture in Yemen has become far more complex. In the war economy, patronage networks are now emerging among previously marginal or unknown figures. The financial dimension of the Saudi-led coalition’s military campaign has extended patronage networks across national borders — though historically Yemen is accustomed to a degree of patronage from its Saudi neighbor. Alleged collusion between Houthi-affiliated importers and officials allied with the internationally recognized Yemeni government indicates patronage networks that potentially cross the frontlines of the war themselves. As greater numbers and a wider variety of actors profit from illicit activity in the war economy, vested economic interests in continued conflict become more entrenched.

Anyone concerned about building a stable post-conflict Yemen must take seriously the challenge presented by corruption in Yemen’s war economy. With this in view, the following guiding principles and recommendations are offered:

Guiding principles for policymakers aiming to address corruption in Yemen:

September 30, 2021 White Papers
In July 2018, the Rethinking Yemen’s Economy initiative published a White paper that explored how the collapse of Yemen’s economy and the fragmentation of central government institutions during the war affected local councils. This new White Paper builds on those findings by examining how local governance has evolved in the intervening years, with a focus on the relationship between local…
Read more...