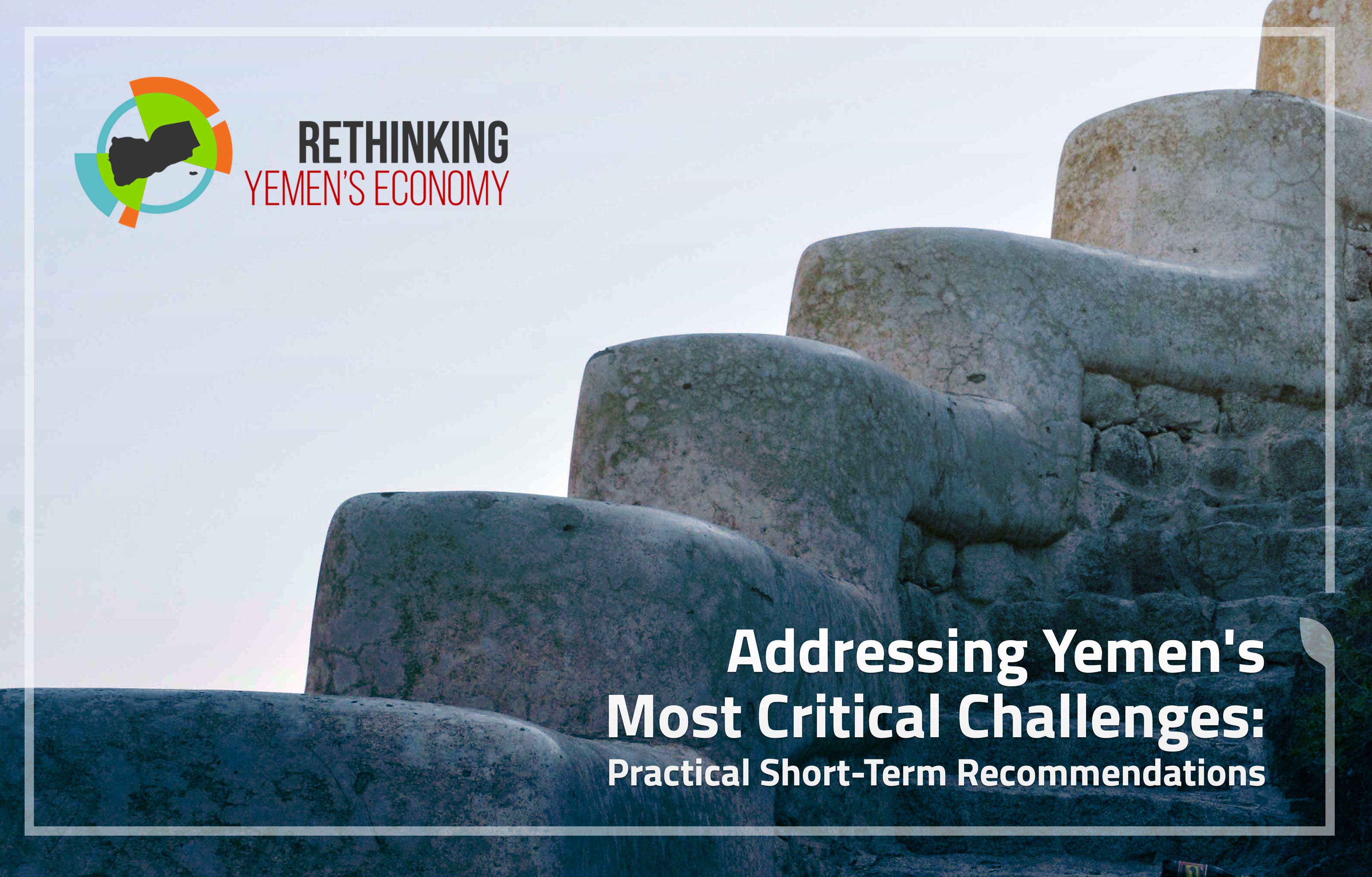 As part of the “Rethinking Yemen’s Economy” initiative, the Development Champions Forum met in Amman, Jordan, between April 29 and May 1, 2017, to discuss practical interventions necessary to address the multiple and varied economic challenges facing Yemen. These challenges were identified within three main, if overlapping, categories; the food security crisis, the problems faced by the banking industry, and the collapse of basic service delivery.

In regards to the food crisis, the Development Champions’ recommendations called on the international community to move quickly in  fulfilling all aid pledges. The champions also emphasized that aid should be cash-based rather than in-kind assistance whenever possible. They called on all parties to the conflict to work towards removing the logistical and financial obstacles affecting the importation and distribution of food and medical supplies, and to urgently improve the management of major commercial entry points, such as the ports of Hudaydah and Aden.

Regarding the banking sector, the Development Champions’ called on all parties to work towards a united and functioning Central Bank of Yemen (CBY), and stressed on depositing all public revenues in CBY accounts. The champions recommended that international aid funds should be directed to support Yemen’s foreign exchange holdings, in order to facilitate food and medicine imports.

Regarding public service delivery, the champions recommended to focus support on empowering local authorities and building their capacity in service delivery, as well as engaging the Yemeni diaspora in supporting critical service sectors and encouraging international and local NGOs to provide keys services where required.

Over the past six years Yemen has been experiencing a period of widespread destabilization, which intensified in September 2014 and resulted in full-blown civil war and international military intervention in early 2015. While the violence has been vicious and destructive, by far the most damaging consequences for the wider Yemeni population have been how the conflict has undermined the systems by which the country functions – devastating the economy, social integration, the humanitarian situation and developmental progress. The result is that millions of people in Yemen are now enduring severe economic deprivation and near-starvation.

In an effort to identify practical and realistic interventions to address the most critical challenges currently facing Yemen, a diverse array of Yemeni social and economic development experts from the public, private, and academic fields gathered for the first Development Champions Forum in Amman, Jordan from April 29 until May 1, 2017. The Forum was part of the “Rethinking Yemen’s Economy” initiative, which aims to identify the country’s economic, humanitarian, social and developmental priorities in light of the ongoing conflict in Yemen, and to prepare for the post-conflict recovery period. The recommendations from the Forum are intended to guide the policy interventions of the international community, regional powers, the Yemeni government and all relevant stakeholders in Yemen.

This brief outlines the priorities identified by participants of the Development Champions Forum as the most critical issues facing Yemen today, and their recommendations for addressing these priorities in the short term. It should be noted, however, that participants widely acknowledged that the underlying cause of the immense suffering facing Yemenis is the ongoing war, and without an end to the war all of the following recommendations will be limited in effect and ultimately unsustainable.

Prior to the current crisis Yemen was already the poorest country in the Middle East and North Africa and highly food insecure, with imports accounting for almost 90% of the country’s staple foods. The ongoing conflict has severely curtailed commercial imports and humanitarian aid deliveries from reaching Yemen, while violence within the country and widespread fuel shortages have disrupted internal food distribution networks. These obstacles to food delivery have decreased food availability and dramatically increased food costs, while the conflict has simultaneously devastated per capita purchasing power through the almost complete suspension of normal economic activity, and the consequent increased unemployment and loss of income.

The cumulative result is that in February 2017 the United Nation’s Food and Agriculture Organization (FAO) declared Yemen the “largest food security emergency in the world”; as of May 2017, the United Nations Office for the Coordination of Humanitarian Affairs (OCHA) stated that 17 million people in Yemen required food assistance, with 7 million of these facing a “food security emergency” – this is the Phase 4 classification on the UN’s Integrated Food Security Phase Classification (IPC) index and the last step before the declaration of famine and humanitarian catastrophe. There are 2.2 million children suffering severe acute malnourishment, with one child dying every ten minutes of preventable causes. Almost every governorate along Yemen’s western and southern coast is suffering a food security emergency.

Despite the High-Level Pledging Event for the Humanitarian Crisis in Yemen in Geneva in April – during which various countries and organizations made pledges amounting to $1.1 billion – as of May 9, 2017, donors had delivered funds amounting to only 18.3% of the United Nation’s $2.1 billion humanitarian appeal for Yemen for 2017.

Security and political instability in Yemen since the early 2000s, the country’s association with terrorism and arms smuggling, as well as weak governance and judicial structures, made Yemen a “high-risk” country for the global financial system. Shortly after 2010, American banks then began closing the accounts of Yemeni banks in the United States, which increased the burden and costs foreign banks sustained when dealing with Yemeni banks. With the start of the current conflict and Yemen coming under UN Chapter 7 jurisdiction, large European and American banks ceased to interact with Yemeni banks completely, compounding the burden and costs of international transfers to and from Yemen.

Yemeni banks were then prohibited from sending physical cash to foreign correspondent banks, leading to a large decline in the accounts of Yemeni banks at these foreign correspondent banks. Yemeni commercial banks became unable to meet the needs of Yemeni importers, in turn driving importers to the black market and money exchangers to buy and sell currency and make international payments, drawing liquidity out of the Yemeni banking sector. Yemeni banks became both unable to honor customer requests to withdraw cash – leading to further hoarding outside the banking system – and had no domestic currency to deposit at the Central Bank of Yemen. These multiple, interrelated and mutually reinforcing factors helped instigate a severe public sector cash liquidity crisis in mid-2016.

A further central challenge facing Yemen’s banking sector is the deterioration of the Central Bank of Yemen’s (CBY) ability to steward the economy. As a result of the armed conflict the Yemeni government lost the vast majority of its revenue resources – such as oil exports, which had been the government’s main source of foreign currency – leading to the depletion of foreign reserves through two years of war. Following the relocation of the CBY headquarters from Sana’a to Aden in September 2016, the CBY also lost the capacity to perform most central bank functions.

The Collapse of Basic Public Services

Basic public service delivery in Yemen has long been inconsistent and focused on urban areas; for instance, even before the current conflict almost none of rural Yemen was connected to the national electricity grid. Since the beginning of the current crisis, however, two factors in particular have led to an almost complete erosion of most public services. First, the steep loss in public revenues: Oil exports – previously two-thirds of government revenue – have been stopped completely due to the conflict, with tax and tariff revenue also plummeting amidst general economic collapse; in response, the government authorities cut all non-essential spending in 2015 and focused expenditures on continuing to provide public sector salaries only. Second, the discontinuation of public sector salaries in September 2016 due to a severe public sector cash liquidity crisis (mentioned above): as of May 2017, the vast majority of Yemen’s 1.2 million public servants have not received their salaries for seven months.

Public service delivery has thus been decimated, helping to undermine many of the systems Yemenis depend upon. For instance:  garbage has piled in the streets uncollected and waste management systems have broken down in many cities, helping to create a rapidly spreading cholera outbreak; roughly half of Yemen’s public healthcare facilities are no longer operational, and major shortages in staff and medicine have left those still open only partially functioning; the UN has also reported that some 4.5 million school children may not finish the school year because of the disruption in public education.

International Aid Organizations and the Yemeni Private Sector: The Need to Improve…

March 16, 2018 Policy Briefs
The current humanitarian crisis in Yemen has been precipitated by almost three years of civil war and regional military intervention, with the United Nations declaring the country the world’s largest humanitarian emergency in January 2017. At the end of last year the UN Office for the Coordination of Humanitarian Affairs (OCHA) released its 2018 Humanitarian Needs Overview (HNO) in which it…
Read more...

October 2, 2019 Policy Briefs
Even before the current conflict, Yemen’s public finances suffered from an overdependence on energy exports, one of the lowest tax collection rates in the world, and chronic budget and balance of payments deficits. The government’s consistent operating deficits were funded through domestic debt instruments – drawing investment away from the private sector – borrowing from its own central…
Read more...

January 16, 2020 Policy Briefs
This policy brief summarizes discussions regarding Yemen’s human capital at a “Rethinking Yemen’s Economy” workshop held in Amman, Jordan, on August 24-25, 2019. The workshop participants agreed that Yemen’s human capital accumulation has almost certainly regressed since the current conflict began. However, there is a dearth of reliable data to assess the scope and nature of this regression…
Read more...