Deterioration of the Foreign Exchange Rate of the Yemeni Rial 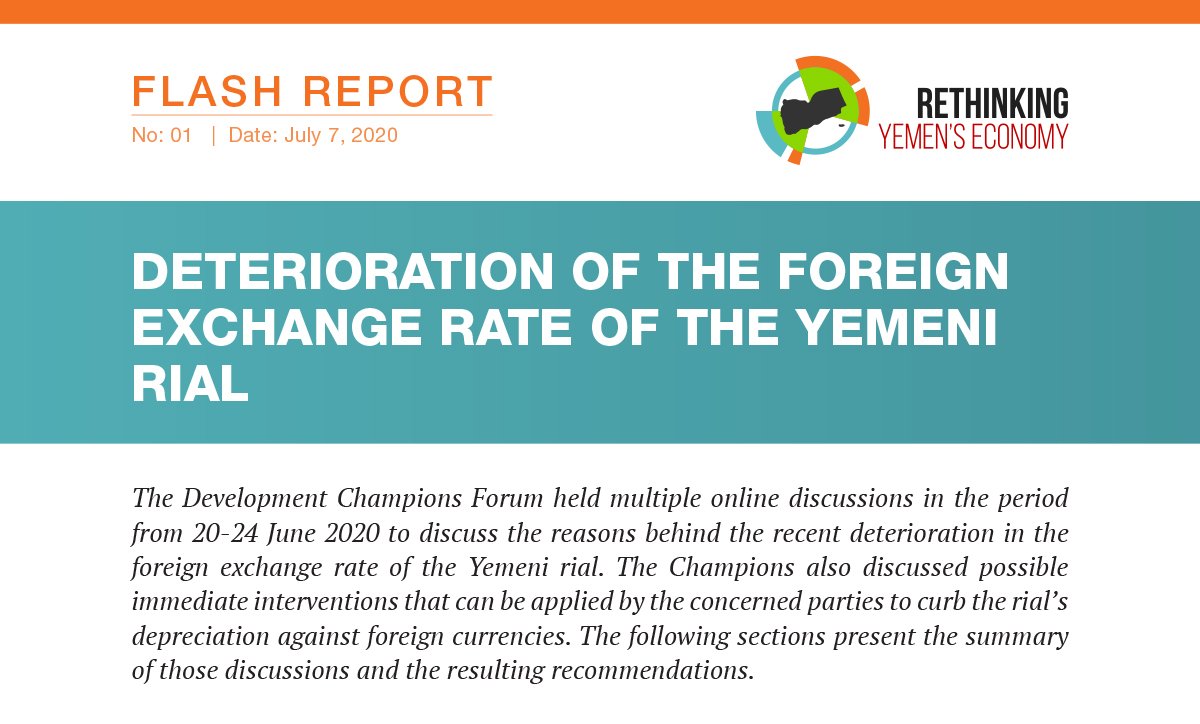 The Development Champions Forum held multiple online discussions in the period from 20-24 June 2020 to discuss the reasons behind the recent deterioration in the foreign exchange rate of the Yemeni rial. The Champions also discussed possible immediate interventions that can be applied by the concerned parties to curb the rial’s depreciation against foreign currencies. The following sections present the summary of those discussions and the resulting recommendations.

Causes of the Deterioration

Yemen suffers from several accumulating structural imbalances that predate the current conflict, such as high domestic public debt, a rentier economic structure, and high inflation rates. These imbalances have impacted the local currency’s stability and the economy in general. The ongoing war has made these structural issues more acute, and its protraction has introduced new factors further impacting the economy.

To summarize, the key causes of the present deterioration in the Yemeni rial are as follows:

1. Diminishing foreign currency reserves of the Central Bank of Yemen due to the following:

a. Depletion of available reserves at the war’s onset;

c. Depletion of the two billion dollars deposited in March 2018 by Saudi Arabia into the Central Bank of Yemen to support financing Yemen’s essential foodstuff imports. (The remaining amount of this deposit is less than $300 million. Besides, in recent months, increased difficulties have been faced to withdraw funds from this deposit.)

In addition to the erosion of the Central Bank’s foreign currency reserves, remittances from Yemeni expatriates have plummeted. Initially, foreign currency inflows into Yemen from remittances were impacted largely by Saudi Arabia’s campaign to nationalize its labour market. The impact of these policies and restrictions was subsequently compounded by the outbreak of COVID-19. This is due to the pandemic’s impact on the economies of neighbouring countries where the majority of Yemeni expatriates work.

2. Lack of coordination between the government's fiscal policy and the monetary policy of the Central Bank of Yemen, while CBY continues print and issue new money without cover to finance the expanding deficit of the government’s budget through overdraft (credit).

3. The split of monetary policy between Sana’a and Aden and the use of exchange rate fluctuations for political aims (e.g., the strict enforcement by the de facto authority in Sana’a of its ban on new banknotes issued by the Central Bank of Yemen in Aden; and the dispute over the mechanism of withdrawing from the aforementioned Saudi deposit to cover import documentary letters of credit (L/Cs) issued by Yemeni commercial banks to local importers of staple foodstuffs). An additional related factor is the impact of the security and political situation on the operations of the Central Bank (e.g., armed robbery of consignments intended for the Central Bank in Aden and Mukalla).

4. Ineffectiveness of monetary interventions by the Central Bank.

5. Psychological factors affecting consumer behaviour on the demand side.

6. Lack of commitment by the local authorities in some governorates to deposit central and local sovereign revenue in the general government account in the Central Bank of Yemen in Aden or its branches in the governorates, instead retaining such amounts in private accounts that are disposed of by the local authorities outside the control of the Central Bank.

7. Closure of correspondent banking relationships with local Yemeni commercial banks by a number of international correspondent banks due to the ongoing state of war in the country, the status of the central bank, and the weak capacities of some Yemeni banks.

1. The Development Champions Forum stresses that economic stability is inevitably dependent on ending the war. Consequently, the top priority is to intensify peace efforts and reach a political agreement that secures fair and sustainable peace. Nevertheless, until the conflict ends, it is imperative for all actors to continue to strive to prevent further economic collapse and suffering of Yemenis.

2. Containing the depreciation of the Yemeni rial requires an effective management of the wartime monetary policy that is endorsed by all key political parties and enabled to fulfil its mandate throughout Yemen. The following are various options for possible arrangements to achieve this goal:

a. Reaching an agreement among all relevant parties on a new board of directors for the Central Bank of Yemen, which must be in accordance with the Central Bank Law (Law No. 14 of 2000), OR

b. Forming a supreme committee with international supervision and support to coordinate the country's monetary policy, provided that its decisions are binding for all. There are different options for the membership of this committee that can be discussed further. For example, the coordination committee can consist of Yemeni monetary and finance experts and be headed by a consensual Yemeni or Arab banking expert. Alternatively, it can consist of agreed-upon specialized Arab experts.

3. Finding incentives by the international community to encourage parties to the conflict to reach an agreement on any of the above recommended arrangements. These incentives could be in the form of funnelling donor aid and grants that are in foreign currency, such as those pledged in previous donor conferences, through these new channels that will have been agreed upon by the parties. Also, new donor aid and grants or deposits at the Central Bank can be allocated to encourage such agreement.

4. The GCC countries must urgently intervene with new deposits or grants similar to the Saudi grant provided in October 2018, given their significant positive impact on Yemen’s economy, in addition to accelerating the disbursement of the remainder amount of the current deposit. Furthermore, an international audit firm should be engaged to review technical and financial aspects of the previous deposit as a first step, in addition to auditing the accounts of the Central Bank of Yemen from 2016 to 2019 as stipulated by the Central Bank Law in order to build trust of all stakeholders in the Central Bank.

5. Revive previous talks between Yemeni banks and official authorities and commercial banks in the GCC and other countries such as China to find new trade financing facilities and arrangements.

6. Yemeni banks and experts should be urged to consider utilizing technology to deal with the current banking challenges, such as expanding the use of existing electronic portfolios, in addition to studying the potential use of cryptocurrencies in Yemen after regulating them with effective local legislations.

7. A joint banking control system between Yemen and Saudi Arabia could facilitate the funnelling of expatriates’ remittances through official banking channels. As a first stage towards that goal, all banking and security restrictions that are presently in place on dealings between Yemeni and Saudi banks need to be lifted.

8. Financial assistance from donors ought to be sought to procure the services of a specialized international firm that can build the capacity of Yemeni banks to comply with the requirements of Anti-Money Laundering/Combating the Financing of Terrorism and lift any international banking restrictions and restoring relationships with international correspondent banks.

9. Any expenditures by the coalition in Yemen should be transferred through the Central Bank. Besides, donors are urged to funnel their support through channels that promote monetary stabilization.

10.  Implementing the recommendations made by the Development Champions Forum in its previous policy briefs.

The Development Champions stand ready to engage in further discussions with relevant stakeholders on any of the points.